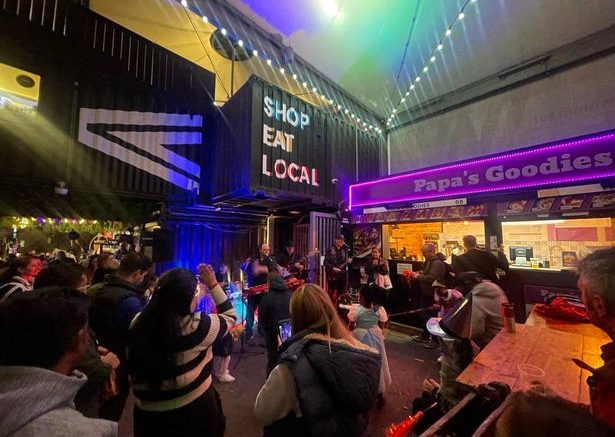 After weeks of talking about the spookiest day of the year, we can finally enjoy Halloween as it is just days away. Many Hertfordshire residents will celebrate this occasion all this weekend donning their spookiest costumes.

The county has hundreds of planned events, parties, pumpkin trails as well as many haunted places worth visiting after dark. Earlier this year, the elected Mayor of Watford, Peter Taylor announced that the town’s market will return as ‘Market Lates’ for Halloween.

He promised that the event would be full of “spooktacular tricks, treats and scarily good street food”. As last year’s Halloween night market event organised by Watford Borough Council was a great success, HertsLive decided to visit this year’s event to see what it was all about.

The Halloween market took place on Friday, October 28 and lasted nearly five hours. It started at 5.30pm and ended at 10pm.

Children could enjoy spooky face painting all evening and adults could have their own fun and enjoy special Halloween shots. Market visitors were also treated to some live performances by the band ‘The Razorz’ or could watch magic tricks from Martin Cox, local magician from Bishop’s Stortford.

The Razorz show delivered a highly energetic performance. This partying band has been playing and singing the best songs of the previous 50 years with some recent chart hits. The crowd went crazy while the band played the classics, ‘Sweet Caroline’, ‘Dancing in the Moonlight’, and my absolute favourites that night, a country classic, ‘Wagon Wheel’ or song for all ladies, ‘Pretty Woman’.

The band has been performing for nearly two hours, from 7pm to 9pm and in that time, people danced, sang, gathered together and bonded as a community. The atmosphere felt amazing.

Trying out some of the spooky food

The Halloween installment of the Watford Market Lates offered a wide variety of food options for all participants. If you got hungry in between concerts, magic tricks or face painting you could choose something to eat from a range of vendors.

There were many spooky vendors offering devilish dishes and drinks. You could pick something as simple as fish and chips or go a little extra. A wide selection of curry, waffles, vegan dishes, and Caribbean and Korean options were waiting to be ordered.

Families would easily find something for their children too but also for themselves, as the alcohol selection was surprisingly broad. People would even stop and encourage you to purchase alcoholic cocktails – who could say no?

Despite not being interested in alcoholic drinks myself, it was a must to get some dinner. And there it was, Papa’s Goodies. The place seemed to attract the biggest attention of all the other vendors.

Papa’s Goodies was serving up some very delicious-looking waffles and a variety of drinks. They had ‘bloody’ tequila shots which seemed to be very popular as well as mulled wine and beers.

The vendor served not only sweet waffles but also savoury ones. As it was something different I thought it would be a good option. The first disappointment came though when I tried to get grilled chicken and waffles, as this one was out of stock.

A staff member who was serving encouraged me to get fried chicken and waffles. Additionally, I picked just plain with salty fries (there were also paprika and peri-peri fries available).

The second disappointment came quite quickly after as the waiting time seemed to be longer than anticipated. I would have expected that the service would be faster for such a simple dish.

By looking and other people, a group of young men felt quite disappointed when they waited around 15 to 20 minutes for their food. It really does show you how popular the event and food were, however.

After paying and waiting around 20 minutes for the dish, I finally received one. To quickly sum up, the fries were salty (as I wished) and greasy. Moving on to the waffle, I soon wished I had perhaps tried something else.

The portion was quite big and it was hard to eat it because it was falling apart. As there were two sauces, (maple and garlic mayo, or you could pick other ones) it quickly became soggy, sticky and messy.

If I was supposed to rate it, the staff would have received 8/10 as they really try to serve anyone as quickly as possible and were very polite. When I asked for a receipt, she offered to email me one or send in a text. Although the service was really up to standard, the food just was not special and felt plain. The waffle and fries are getting 3/10, I enjoyed the maple syrup but that would be it.

The Halloween themed Market Lates should 100 per cent return next year in Watford. The atmosphere of the market itself was amazing and people were very clearly enjoying themselves.

The local children had a blast, all wearing Halloween costumes or getting face paintings. It seemed like the event was quite popular within older generations too.

Groups of people were drinking beers and singing during ‘The Razorz’s concert. This family-friendly event gave the residents of Watford an exciting Halloween experience and I really hope it returns next year.