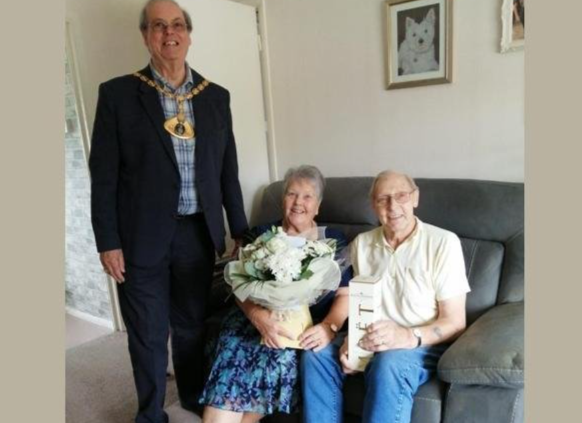 A Hemel Hempstead couple have celebrated their Diamond wedding anniversary.

Betty and David Hicks, of Highfield, who are both 82, received a special card from Her Majesty The Queen, organised by their son Alan and his wife Jane.

Their granddaughter, Natalie Hicks, contacted the Mayor of Dacorum, cllr Stewart Riddick, and asked if he would visit them on their 60th wedding anniversary.

She said: “He kindly agreed and arrived with his driver in the mayoral car and he bought gifts of beautiful white roses and a bottle of champagne.

“He spent over a hour with them reminiscing about the good old days.

“My grandparents were so humble to have him visit and spend the time with them, and I can’t thank him enough for his time.”

When asked about what advice they would give to other couples, they said: “Our advice for a long and happy marriage is always listen to each other.”

The couple got married at St. Peter’s and St. Paul’s church in the village of Hannington in Northamptonshire, on August 26, 1961.

Advertise your Business on What’s On In Hemel Hempstead and join the other Businesses that advertise with us. Explore our website for local businesses and you will see Restaurants, Shopping, Pubs, Sightseeing, Sports, Events, Nightclubs, & Accommodation. Also see the available trades people for all your domestic or commercial work.